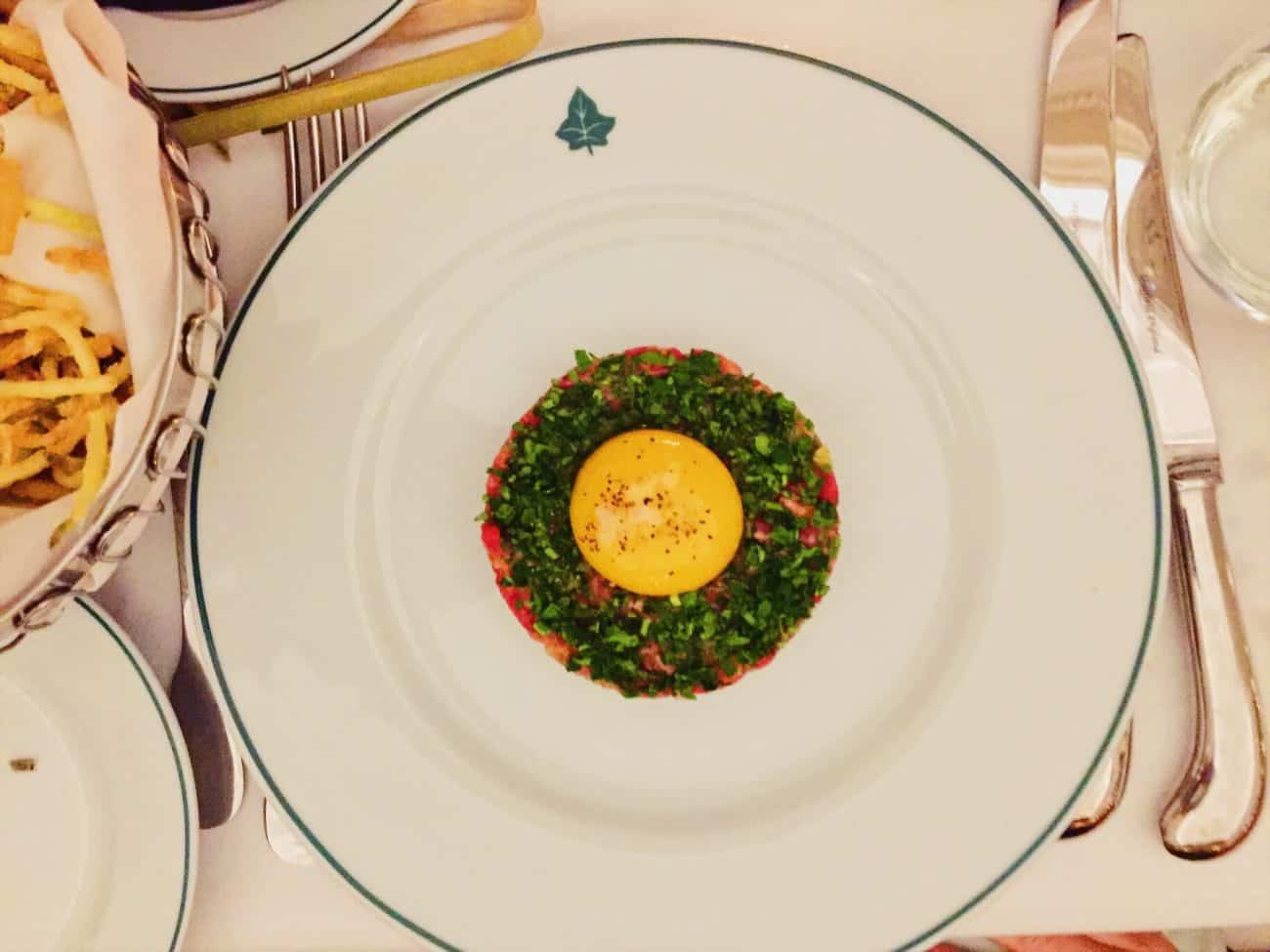 Before we get in to the detail of The Ivy Cheltenham, or to give its full name The Ivy Montpellier Brasserie in Cheltenham, what do you know about The Ivy? I mean the actual The Ivy in Covent Garden, Soho, London.

It’s famous for being the centre of the West End social scene and lets be honest, complete and utter wanky bollocks. Originally that meant celebs everywhere, people like Vivien Leigh, Marlene Dietrich, Ant & Dec… You’ll probably only get a table if you’ve polished an Oscar. But you already knew that and most reviews you’ll read will want to provide you with loads more of that – here’s a link to the wiki page, fill your boots.

In short, big brand restaurant in London famous for being cool is acquired by some clever people, they invest in opening a load more outside of London. Are they any good though or just tricking us out of our hard earned cash by passing off? The anticipation has been very real and I think Cheltenham feels rather honoured to be have one of it’s own.

Bear in mind, whilst The Ivy Montpellier Brasserie Cheltenham is owned by the same company as The Ivy, it’s not strictly a sister restaurant. The ‘Grill and Brasserie’s are a separate chain of regional restaurants and at the time of writing there are 15, in places, amongst others, such as Bristol (my home town), Bath, Harrogate and Edinburgh. There are a further 7 planned in Dublin, Cambridge, Guildford, Winchester, Birmingham, Leeds and Brighton. The Ivy Cheltenham, I hope, is a good indicator of the rest.

Firstly, you have tip your hat to the building, the Rotunda in Montpellier was pretty special before they nabbed it off Lloyd’s Bank, but they’ve decorated and it now has to be one the finest looking dining establishments anywhere, not just Cheltenham. I hope they used Farrow and Ball – they’ll get found out around here.

The entrance, leading to a small vestibule (more like an air lock) adorned with the traditional Ivy stained glass hosts the maitre’d and cloakroom, you can’t see the main restaurant, raising your excitement levels. The expression ‘if your name’s not on the list you’re not coming in’ applies, so make sure you book. A gentry looking chap tried to shoot past to the bar, no chance – they politely, friendly and professionally asked him to book. It certainly made those of us with bookings feel extra special.

You’ll be led through double doors to the restaurant via a short corridor flanked by wings of intimate tables and then in to the centre piece itself, the rotunda. It’s not like when you walk in to Twickenham for the first time, but your neck will be craning to grab a look, it’s stunning. The dome loops itself around the bar, walls adorned with…horses, obvs, and it will be the area that most people request a table for, but don’t dismiss those wings, they look wonderfully private, comfortable and a great place to get some privacy.

Tables are ever so slightly close together, there can be a bit of bumping, mainly from the front of house guys, but as you’ll learn, that’s fine. This is my segue to the general vibe of The Ivy Cheltenham.

They’re famous for a vibrant social scene, that’s what it is. Don’t think this is Michelin Star fine dining, all stuffy and ONLY about the food. This is a lively and active cocktail bar and restaurant. The front of house are friendly first and foremost, they are knowledgeable about the menu and what’s behind it. I did ask, just to sense check the culture, if there was a sommelier, my guy didn’t know what that was – so what? The place was unexpectedly relaxed…to its credit.

Couple of cocktails to get going, they do have their own local signature cocktail English Spa Royale which is a Kir Royale created with Sipsmith sloe gin, Briottet Rose liqueur & hibiscus topped off with Champagne, had one of these at their pre-opening evening – they went fast. Tonight was a Pitsville Collins and a Buttered Manhattan, the latter being the best of the two.

A few of the cocktails have a local angle, which is a nice touch. The Pitsville Collins is a long vodka, elderflower and cider based drink with plenty of ice, cucumber, apple and lime. The voddie is Wyborowa, which is Polish and owned by the Absolut guys, I get that. But I was a little disappointed that the cider couldn’t be local, it was Aspel from Suffolk. I really like Aspel, but we’re in the west country, cider is a way of life. If it needs to be dry, Stowford Press, just 45 minutes up the road from Cheltenham would have done just as good a job, if not better.

In a tumbler over rocks arrived my Buttered Manhattan, which is really good, outstanding in fact. Its like a vodka earl grey tea with a touch of orange, almost lady grey without the spice. It’s dry with a smashing colour and great to sip whilst you look at surprisingly large menu of primarily modern British greats – I would call this traditional fair. 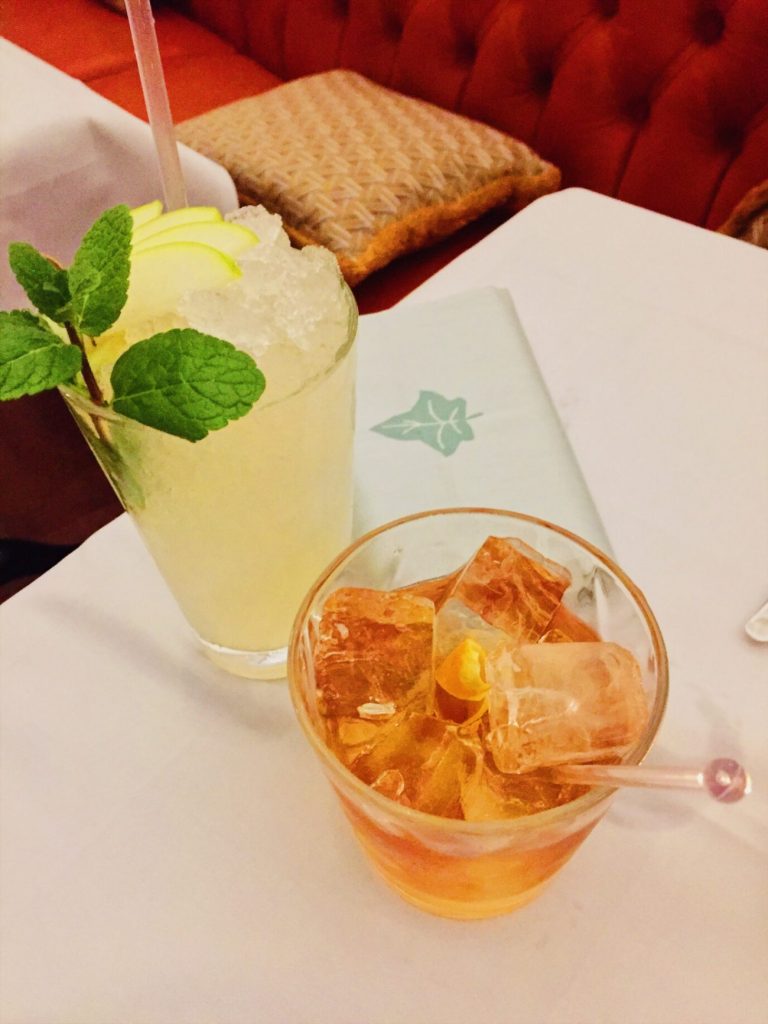 You can get their famous shepherds pie for £13.50 or a burger for £14.25, even fish and chips for £14.50. See what I mean, the food is incredibly British and traditional with only a few exceptions and priced quite reasonably? You can spend more on steak should you wish, topping out at £27.95 for a bone in rib-eye to which you can add a sauce for £2.75. I’ve forgotten the last time I got a sauce as an option included in the price. The point is though, you can spend lots or not – making the Cheltenham Ivy incredibly accessible.

Whilst you’re looking I recommend a bowl of Zucchini Fritti, they’re real good, Zoodles in tempura. 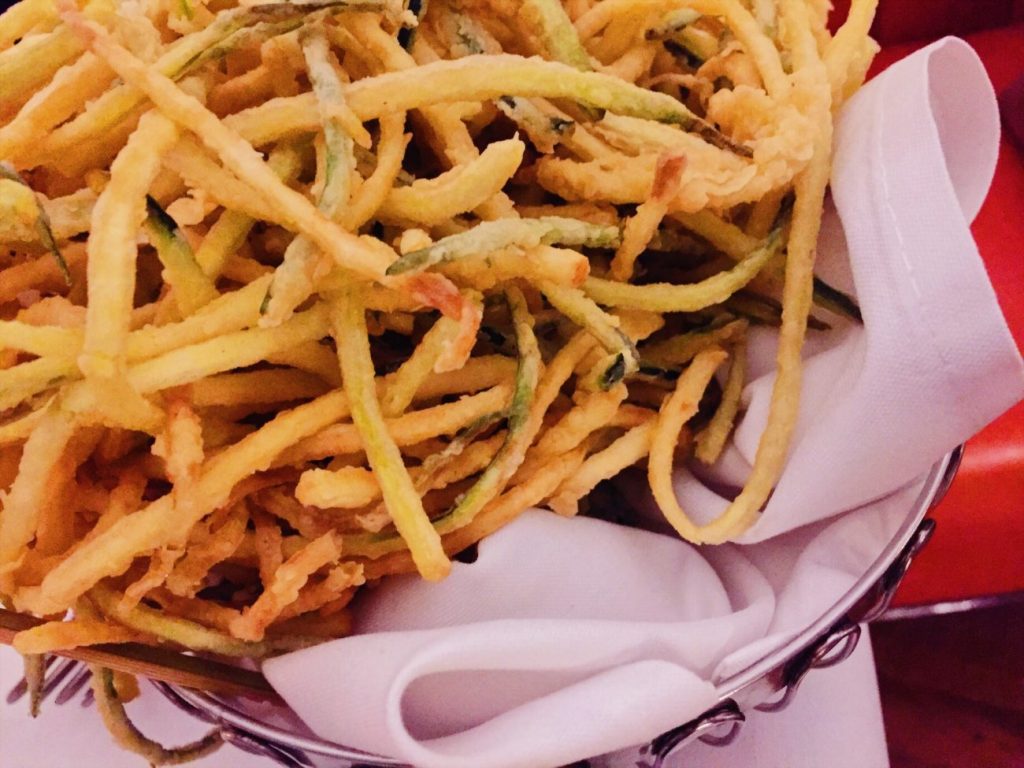 The bill was £144 for two people, 3 courses, with nibbles, sides, cocktails and a bottle of wine. I think that represents great value. I would normally save the price for the end, but it sets the tone for the whole experience. Here’s what you can get for the money:

I did ask my friendly waiter for his choice of main and he went for the duck curry, I felt bad for ignoring him so I let him pick desert and I’m glad I did.

Dessert – if you get this far

All in all, the atmosphere, reputation and the building makes this place and it doesn’t disappoint. The food is well executed in both flavour and presentation without being too over fussy, it is traditional stuff, but The Ivy Montpellier Brasserie Cheltenham pulls it off.

You can and should book up in the knowledge that you are coming to an exclusive restaurant which is incredibly laid back and not as expensive as you might have thought. Don’t worry about airs and graces, unless you want to, you can have that type of night if you like or you can just get your mates together and go out for a laugh, good food and cocktails.

It’s definitely pretentious, but in a good way.

All prices correct at time of publication.